To mark the 50th anniversary of its existence, Bergische Universität Wuppertal will open its doors on Saturday, May 21st, 2022!

At the beginning of the 1970s, the state of North Rhine-Westphalia decided to establish five comprehensive universities, including one in Wuppertal, where Johannes Rau founded the university in 1972 and officially opened it on August 1st, 1972. Since then it has been a place of living and learning. You can find more interesting facts about the history of Bergische Universität here. On the university’s Instagram, you can also find many posts about past events and contributions about past circumstances, such as the draining of the university pond. 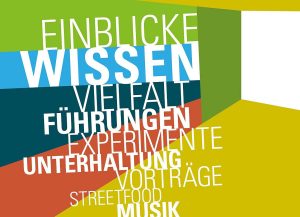 Under the motto Understanding. Communication. Shaping., German: “Verstehen. Vermitteln. Gestalten.“, which has characterised the university for decades, exhibitions, lectures and readings will take place this year. On the Open Day, you can also look forward to film screenings, laboratory visits and a colourful musical and culinary programme.

The event on May 21st starts at 11 am and ends at 6 pm. All campuses will open their doors, which means that not only the main campus Grifflenberg can be admired, but whoever likes can explore the Freudenberg Campus and the Haspel Campus on their own or as part of a shuttle tour.

In addition, the student councils offer their own programme. If you wander around the university, you will find their stands scattered around.

Not only May 21st will be a big event this year, but many events dedicated to the anniversary will take place this year.

These include an ecumenical service on June 26th at 12 noon with musical accompaniment by the University Choir and a celebratory sermon, anniversary tours of the University Arboretum on May 18th at 4 pm and September the 25th at 2 pm at the Grifflenberg Campus, and on July the 5th and 6th at the Grifflenberg Campus Streetfood@Campus, where you can embark on a culinary journey.

On November 5th at 8 pm, the 17th University Prom “Uniball” will take place in the Historical Town Hall, on the occasion of the anniversary and to make up for two missed years due to Corona, this year especially pompous!

The whole schedule can be found on the website of the University of Wuppertal.